Update: Thank you for your overwhelming support and responses to this event! If you have any thoughts, we would love to hear in an ensuing discussion at the following site. 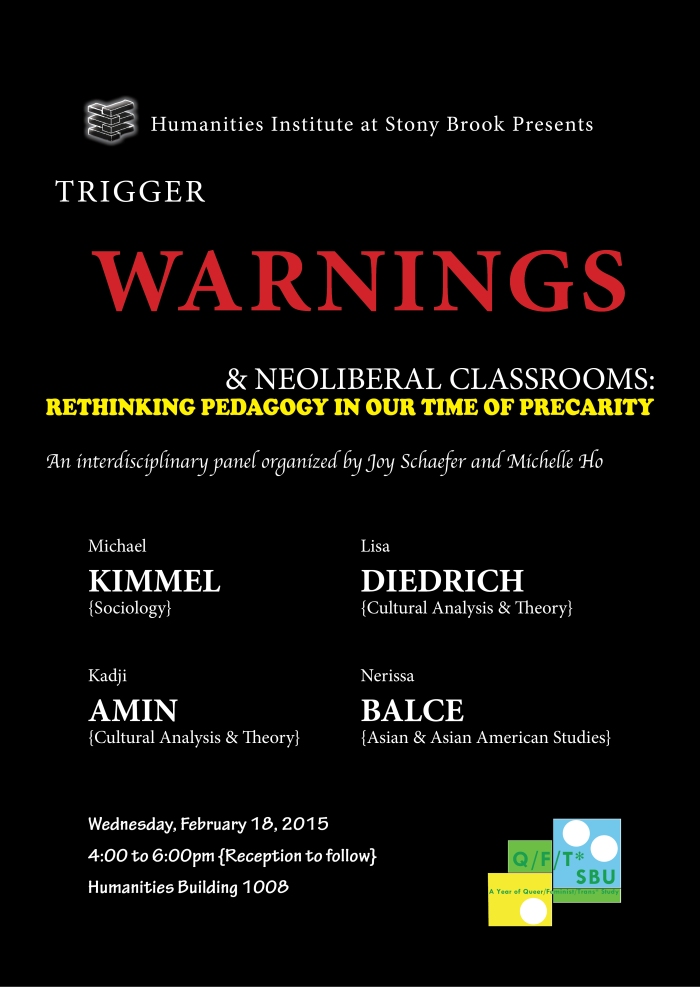 After months of death and rape threats protesting her work, feminist cultural critic Anita Sarkeesian canceled her talk at Utah State University that was scheduled for October 15, 2014. Despite having received an email threatening a “shooting massacre” at the event, the institution could not prohibit the carrying of guns due to state law. The case of Sarkeesian, who challenges representations of women in video games, highlights the issue of safety in academia. As feminist speakers and teachers are increasingly feeling less safe in certain pedagogical spaces, students are demanding “trigger warnings.” They, too, want to feel safe—both physically and emotionally—in our time of precarity. As Tavia Nyong’o says, it is not that this networked generation is unfamiliar with violence—rather, its members have grown up with the ability to edit and delete images (and knowledge) with ease. Yet, Jack Halberstam argues that there is no one-to-one relationship between trauma and the material triggering it.

This panel aims to encourage pedagogical discussions among instructors whose courses challenge constructions of race, gender, sexuality, dis/ability, and nationality. At the wider institutional level, it also draws awareness to the issue of trigger warnings on course syllabi, such as at UC Santa Barbara, where student leaders pushed for them to be mandatory. We fear a dystopia of administrators who enforce neoliberal classroom policies, especially because classes that challenge the status quo would be precisely the ones policed and censored. We do not want to treat our students as consumer-citizens by avoiding hurt feelings and heated classroom debates, or by necessarily catering to their trigger warning requests. We want to create productive spaces that might allow students to begin working through, or to make connections that could lead to solidarity, instead of necessarily protecting students. At the same time, we want to advocate a “pedagogy of care” and a “safe enough” classroom, or as Ann Pellegrini defines it, “someplace safe and beautifully caring in our time of precarity.”

Four Stony Brook University professors will offer their thoughts on the following: